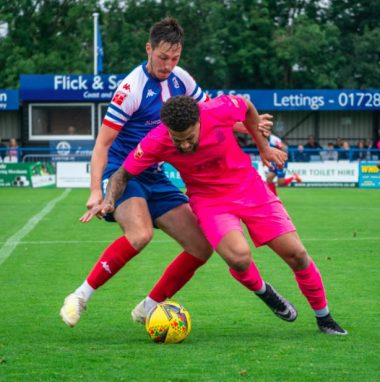 Match-winner Dan Sweeney, right, attempts to weave his way past his marker. Pictures by Ben Cunningham.

A third-minute Adam Mills strike to put the Victory Road hosts in front could easily have caused heads to bow after a lengthy journey from Worcestershire to Suffolk, but the response from United demonstrated otherwise – with Dan Sweeney winning the game late on after Dan Djurovic levelled before half-time.

Making it six points for the season for the Reds after three games played, Clarke was left enthused by what he saw from his valiant team.

“It’s a very difficult place to come, they were unbeaten this season and enjoyed a fantastic performance against our rivals Bromsgrove,” said the 47-year-old.

“We knew they were going to be difficult, and we got off to the worst possible start.

“But it showed that we’ve got great character in the team. We’re very young [as a side] and we could have folded under pressure.

“When we got to the 25 to 30 minute mark, we got back into the game and we looked a genuine threat on the counter attack – in the second half we deserved to win.

“All in all, it’s been a good start to the season winning two out of the first three and bouncing back [from the Stratford Town defeat] in style.” 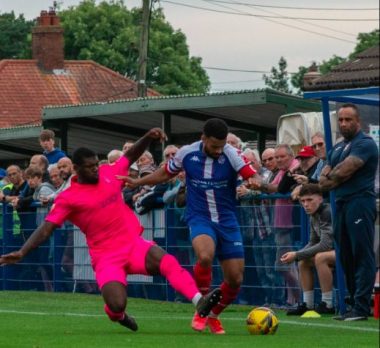 Khaellem Bailey-Nicholls makes a sliding challenge in front of the watchful eye of manager Matt Clarke. Pictures by Ben Cunningham.

A deficit early on in a game would be enough to unnerve most sides, so the manner in which Redditch went about their business in response to Mills’ early slotted finish was admirable.

Surviving a bout of pressure in the early exchanges, the visitors eventually found their feet and slowly but surely began to threaten – Curtis Hutson taking matters into his own hands to trouble Samuel Donkin in the Leiston goal with a solo run and drive towards goal.

But it would be a vital touch from Djurovic which instead hauled United back on level terms following a goalmouth scramble from Kieran Day’s corner in first-half stoppage time.

That equaliser appeared to breathe new life into Redditch, so it was no surprise that they openly took the game to their opponents in the second half.

The decisive moment came 11 minutes from time when Khaellem Bailey-Nicholls was tripped inside the penalty area, offering Sweeney the chance to become a hero and fire home low into the corner.

Seeing the game out, Redditch will be in fine spirits for a Bank Holiday weekend double-header, starting with Saturday’s meeting with Tamworth at the Trico Stadium, before a derby at Alvechurch on Monday.

ALVECHURCH lost on home soil for the first time this season after going down 1-0 to Hednesford Town.

An Andre Landell penalty was enough to edge the encounter in favour of the Pitmen, in what was often a lacklustre affair at Lye Meadow.

With the visitors enjoying the better of the chances, the former Alvechurch man punished his former side for conceding a 39th-minute penalty to give Hednesford a lead that remained until the final whistle.

Prior to their Redditch clash, the Church head to Lowestoft Town on Saturday.

BOTH Redditch and Alvechurch will be on the road in the first round of FA Cup qualifying, following a midweek draw.

United will go to Stamford AFC of the Northern Premier League Division One Midlands, while Ian Long’s Church visit league rivals Tamworth, with both ties to be played on Saturday, September 4.