Reds bidding to finish on a high at Church 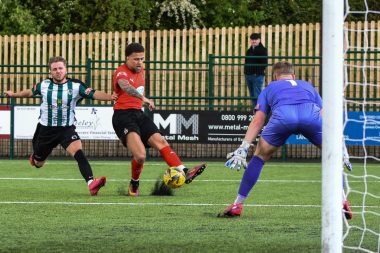 Daniel Sweeney, centre, attempts to find a teammate with a flashed ball across the penalty area. Pictures by Richard Bowcott Event Photography.

THE BATTLE of Worcestershire went the way of Bromsgrove Sporting in last weekend’s Red Recruitment Trophy encounter, as Redditch United succumbed to a late 2-1 home defeat.

A 93rd-minute winner from Leon Broadhurst sent the handful of Sporting supporters who made the trip to B97 into raptures, making it a third straight win for the Rouslers over their local rivals – and the first since Bromsgrove reformed in 2009 at the Trico Stadium.

As it stands, Redditch remain winless and without a point in the end-of-season competition, and take on Alvechurch at Lye Meadow this Saturday hoping to end the 2020/21 campaign on a high note, ahead of what proves to be an exciting new season in prospect for Matt Clarke’s men.

During a well-contested first half, the Reds shaded the best chances, with Bromsgrove shot-stopper Daniel Platt’s goal under threat on a number of occasions.

Ex-Sporting man Tom Rankin headed over the bar from a good position, whilst Kieran Day’s free-kick and a sumptuous dink from range from Jordan Clement both threatened to find the net.

Daniel Sweeney drew an important save from Platt as the half-time whistle approached, but a minute before the break Sporting were clinical in taking their first key opening to go in front. 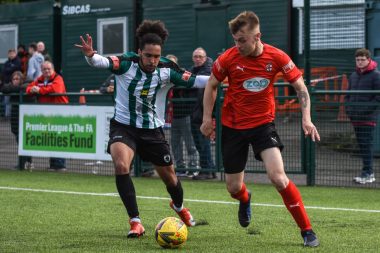 After jinking his way into a prime shooting position to the left side of Redditch’s penalty area, Will Shorrock drove the ball into the bottom corner to leave keeper Kieran Boucher with no chance.

But just a minute after the restart, it was 1-1 as substitute Jack Watts made an immediate impact, venturing down the flank before burying his shot.

From that moment on, however, Bromsgrove comfortably created the better openings and looked the side most intent on claiming the three points.

Jason Cowley featured predominantly, going close on a number of occasions to deciding the game against his former side.

A header flashed wide of the mark from Jak Hickman’s cross in what appeared a golden opportunity to grasp the all-important winner, and an acrobatic stoppage-time effort was somehow saved by the instinctive Boucher.

From the corner that followed, a brief spell of pandemonium inside the United penalty area resulted in Broadhurst appearing in the right position to touch home a 93rd-minute winner with what effectively proved the last touch of the game.