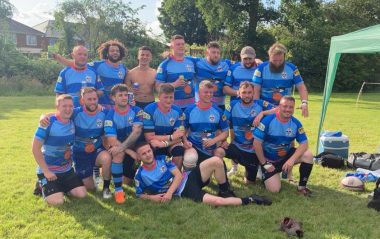 The Kingfishers were emphatic during their Aston Sevens success.

A PERFECT run in the Aston Sevens tournament meant Redditch reigned supreme last weekend, blowing away the cobwebs in style in their first outing this year.

Taking a team to Sunnybank Avenue in Birmingham to compete in the event hosted by Aston Old Edwardians, Redditch won four out of four during the group stage, earning themselves a place in the final which also resulted in victory.

Kicking off against Old Yardelians, a 33-17 win was secured after running home three quickfire scores, at which point the Worcestershire side never looked like relenting.

Will Spires played a pivotal role in drawing out the opposition and setting up attacking moves, which allowed the Kingfishers to score at regular intervals.

A clash with Five Ways Old Edwardians then followed, bringing with it a 29-12 triumph, in a fluid display of fast-paced rugby.

Allowing the ball to change hands regularly, Five Ways were blown off the park on an afternoon when Connor Morris impressed – prior to injury – while Chris Upton’s defensive efforts were also noted.

A high-scoring but tighter affair then followed against Dixonians in game three, as Redditch had their work cut out to oust their rivals.

But they did just that despite the opposition adding a few fresh faces to their team pre-match, with Mikey Adams’ physical approach and Leo Fanthomes’ pace two of the stand-out talking points in a 44-36 victory.

And while the third straight win secured Redditch’s place in the final, they were not willing to relent and subsequently swept away Jigsaws in style, running out 36-12 victors.

Matt Allen was one of the many try scorers during that particular encounter, with Jack Bacciochi turning on the style to the appreciation of the crowd gathered.

With it all to play for against an aggressive Old Saltleians outfit, Redditch stormed into a three-try lead to stun their rivals in the showpiece final.

While Old Saltleians did come back into the encounter, tireless harrying by Michael Allen, Clarke Parker and Ian Beale, in addition to last-ditch defending by George Docker, meant Redditch always looked assured of confirming the Aston Sevens crown.