Redditch Ladies 2nds turn on the style - The Redditch Standard

IT WAS a day to savour for Redditch Ladies 2nds who enjoyed a 3-1 victory over local rivals Bromsgrove Ladies 6ths.

The sunshine made for hot playing conditions which tested both teams’ fitness and stamina in what was the Redditch side’s first pre-season encounter. 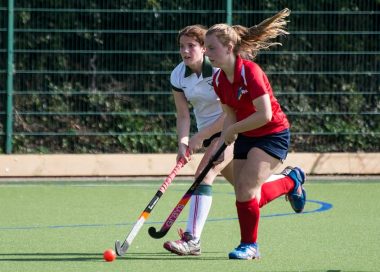 It was a constant battle in midfield between juniors Imogen Martin and Grace Baker (Redditch). Picture by Lee Williams.

Despite the local rivalry, it is always a supportive and encouraging atmosphere between these two teams, offering chances for the younger members of both clubs to gain valuable match experience.

The youngest Bromsgrove players kept Redditch on their toes, but Redditch were able to strike first with an all-important goal from captain Louise Jennings, before Bromsgrove levelled when a misunderstanding in defence led to the ball trickling over the line.

In the second half Redditch utilised a formation change, pushing Becki Clarke from defence into an attacking midfield position which result in greater possession for the Kingfishers.

This culminated in a second goal for captain Jennings followed by a joint effort between sisters Grace and Fran Baker to net the third Redditch goal in the final few minutes to clinch victory. 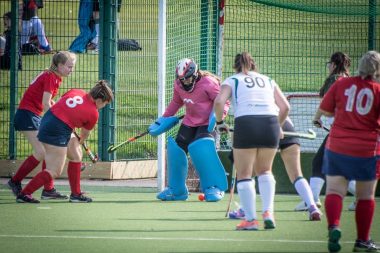 Louise Jennings scores the second of her goals. Picture by Lee Williams.

If this level of skill and confidence is a sign of things to come for this Redditch team, it looks to be a very interesting and exciting season ahead.