The former Kidderminster Harriers player, who enjoyed a dazzling first season at Lye Meadow and was named in the Evo-Stik Northern Division One South team of the season, is under contract to Alvechurch but Church say Boro, who are full-time, have spoken to the player without permission.

The news has left a cloud over Alvechurch’s plans for their debut season in the new Southern Central Step Three division, especially after former Kidderminster and AFC Fylde defender Josh Ezewele has become their fifth addition.

Long told the Standard they had no wish to lose Carter and Nuneaton’s interest has proved disruptive.

“Nuneaton have shown an interest in Ash but they have gone about it in the wrong way,” said Long. “They spoke to him and said he isn’t under contract but he is. We took up the option and he was staying. It’s an illegal approach from my point of view.

“But the figures they are talking have turned the player’s head. We are a couple of weeks from starting pre-season and Ash is a big part of our plans.

“The ball is now in Nuneaton’s court but we are not going to be bullied by anyone.” 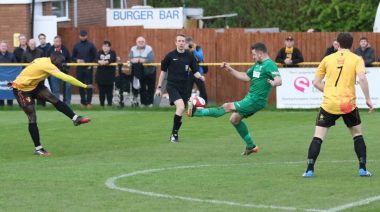 Long admitted it was a blow to lose attacking midfielder Sauane and front-runner Ceesay – who both rejected contracts from Alvechurch at the end of the season – and it would be tough to keep finding hidden gems in the lower leagues. Sauane stepped up from Smethwick two seasons ago while Ceesay joined last summer from Sporting Khalsa.

However, the Church manager is delighted to have secured 21-year-old Ezewele, who started with West Bromwich Albion and then joined Yeovil Town before impressing with Harriers when they finished runners-up in Conference North in 2017. He switched to National League side AFC Fylde last summer but ended the season on loan with Redditch.

With the exit of Jamie Ashmore, Ezewele will offer a right-back option.

“There were other Step Three clubs interested in Josh but he likes what we’ve said,” said Long. “He has proved himself at a higher level.

“He is also looking outside football and we’ve been able to get him a job as an apprentice electrician which is a plus.”

Warriors back ‘no relegation’ plan