Inkberrow’s under-15’s and under-17’s faced each other in an end-of-season run-out on Saturday to bring the curtain down on the campaign.

UNBEATEN league runs from Inkberrow Eagles’ under-17 and under-15 girls’ sides meant it was a season to remember for all connected to the club.

Despite the difficulties of a stop-start campaign brought on by the implications of two lockdowns and further restrictions, the Eagles’ two different age groups shone en route to league glory.

Both plying their trade in the Mercian Junior Football League, the under-15’s scooped the Division Two title and were runners-up in the Junior Cup, whilst the under-17’s stormed to the U17 title and were also finalists in their respective cup competition – played at Pershore Town.

Considering the humble beginnings of the club in 2012, Inkberrow have continued to grow year on year and now house five female teams, will be welcoming a new U10’s side in the new season, and have an FA accredited Wildcats centre to develop the next crop of talent. 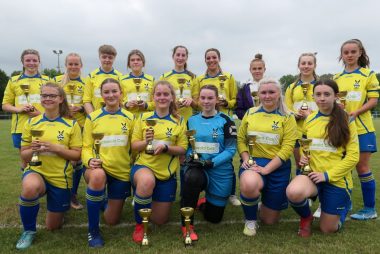 The under-17’s side dropped points in only two matches this term.

Girls and ladies’ club secretary Mark Wilkinson has spoken of his pride at the progress made by the Eagles – who also have made considerable investment into two full-sized grass pitches and an extension to its pavilion club house.

“The club has always been at the forefront of girls football in the area,” he said.

“We are proud to be an FA Charater Standard community club, ensuring all participants from as young as five years of age have a clear pathway through to our ladies team, and have great facilities to enable them to play football safely.”

BOWLS – White Hart top the table in two of their leagues

TENNIS – Gill in second round action at Wimbledon this afternoon