Hudson raring to go for Hereford and Gloucester tests 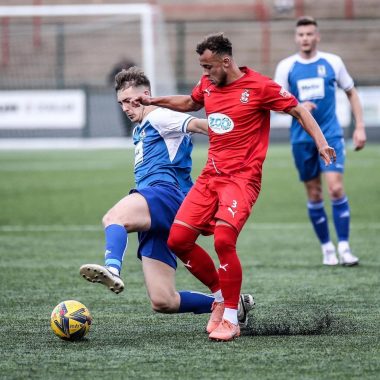 The Reds go head-to-head with the Bulls of National League North on Saturday at the Trico Stadium, hoping to make it three wins from three for the first-team.

With an amendment to United’s fixture at Bewdley Town on Tuesday night meaning a mixed team of under-23’s and reserve players instead turned out in an eventual 3-1 defeat – in which scholar Sol Mullings netted – Matt Clarke’s men will be afforded a few more days of preparation for their Hereford showdown.

It was a solitary strike from the retained Tiago Nassunculo that settled matters against the Wulfs of the Midland League, in a tight encounter that could have easily gone another way had Jack Till found the right side of the post for the visitors late on.

For 23-year-old Hudson, the end result was made all the more sweeter by United’s show of a stern rearguard.

“It’s all about getting minutes in the legs, and it was good to keep a clean sheet – the back four has been strong over the two games,” he said.

“I’ve been here since January now, I’ve had a good chat with [Matt] Clarke and we’ve signed some good players so far, we’re all gelling together and it’s a good set of lads here – so I’m really enjoying it.

“Pre-season has been good, we’ve got good minutes in ahead of tough games against Hereford and Gloucester City, so we’re looking to get in a bit of shape from that, work a bit harder, and hopefully keep a couple more clean sheets.”