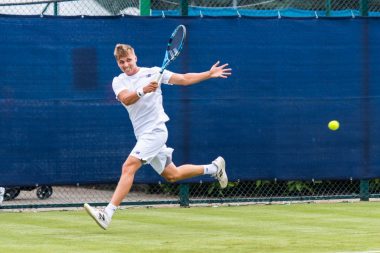 Lloyd Glasspool has won three of the five finals that he has appeared in this year. Picture by Peter Menzel/PPP.

A CAREER-HIGH doubles ranking has been achieved by Redditch ace Lloyd Glasspool, who has propelled himself just outside of the top-100 following back-to-back titles on the ATP tour.

The 27-year-old, who trains at Edgbaston Priory Club, recovered from a quarter-final defeat in the Gran Canaria II Challenger event at the beginning of the month to scoop the ATP 250 Open 13 title in Marseille on March 14 – teaming up with Finnish player Harri Heliovaara to see off Dutch duo Sanders Arends and David Pel in straight sets.

That victory inspired him to a second title in succession, reigning supreme in the Biella Challenger with Australian doubles partner Matt Read, beating Ukrainian pair Denys Molchanov and Sergiy Stakhovsky in another two-set victory.

In all, Glasspool has won three successive finals in 2021 – also lifting the first edition of the Gran Canaria Challenger tournament in February – having lost his first couple at the beginning of the year.

It should be no surprise then, given his successful year to date, that Glasspool’s progress has been underlined by his highest-ever doubles ranking of 102 in the world.

And with another accolade in the form of the Warwickshire Player of the Year for 2020 heading his way, by way of a virtual ceremony for the Warwickshire Tennis awards, there is enough reason to believe that Glasspool is beginning to realise his full potential.

That is the view of Sue Chopra, the chairman of the Warwickshire Junior Tennis Federation, who has lauded the Worcestershire hot-shot.

“Lloyd’s a worthy winner of this award, and a real role model to our rising stars,” she said.

“We’re all thrilled that his hard work is paying off.

“Until now, he’s often been in Dan Evans’s shadow and hasn’t always had the full recognition he deserves, which is a shame, as he’s a great talent, and someone who constantly strives to improve.”