Hamilton at the double to peg back Rouslers 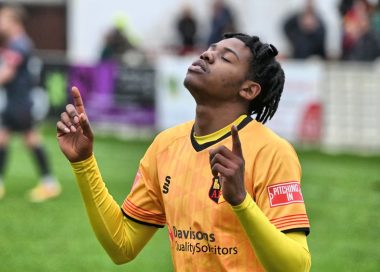 A SIX-GOAL thriller provided festive cheer all-round for Bromsgrove Sporting and Alvechurch on Boxing Day as the spoils were shared in the Red Recruitment Trophy.

Two second-half goals in the space of a minute from Church’s Jamie Willets and Tyrell Hamilton tied things up with just over 20 minutes to go at the Victoria Ground, after Will Shorrock and then Leon Broadhurst both netted to cancel out the latter’s equaliser.

While Jason Cowley’s penalty 11 minutes into the second period looked to have put Bromsgrove out of sight, Brendan Kelly’s men did not quite have enough in the tank to see out victory in the 3-3 draw. 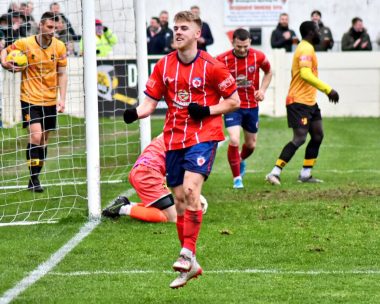 Lee Chilton continues to impress in a Sporting shirt, and it was the experienced winger who set up the opening goal.

The 34-year-old’s centre after beating an Alvechurch player was inch-perfect, giving Shorrock the simple task of touching the ball home from a matter of yards with his head on 11 minutes.

Five minutes later, however, the game was deadlocked once more, a result of a long-range attempt that cracked the post before falling kindly to Hamilton – who tapped into the gaping net.

Joe Hull almost returned to haunt his former employers with a header that was glanced just off target, moments before Broadhurst converted Josh Quaynor’s free-kick.

The Sporting full-back was a thorn in the visitors’ side once more as the game neared the interval, Quaynor picking up possession in a promising area before feeding the ball to Cowley to divert wide.

With the next chance that came his way though, Bromsgrove’s leading goalscorer found the net with ease, stroking past Oliver Taylor from 12 yards to put Bromsgrove clear in front.

But as certain as some results may seem, it took only a matter of seconds for the hosts’ lead to be wiped out entirely.

First, Willets fired home from Dylan Barkers’ header into his path following a corner kick, before Hamilton picked himself up to blast a penalty past Dan Platt after being felled by Luke Ward.

And it could have been so much sweeter for Ian Long’s travelling side, had Kieran Cook done better with his free-kick that found the wall – as opposed to the back of the net – from a prime goalscoring position.

Alvechurch face a wait for their penultimate fixture of the Trophy, with the other two participants Redditch and Bromsgrove facing off on New Year’s Day, the former visiting Lye Meadow on Tuesday, January 5.

The Rouslers are then the visitors to round off Church’s Trophy involvement on Saturday, January 9.