Winter tournament heats up festive period for Reds and Church 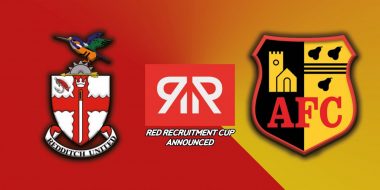 A WORCESTERSHIRE winter mini-league is set to offer Alvechurch and Redditch United a boost during the downtime experienced by the continued suspension of the Southern League Premier Division.

Following the result of last Thursday’s vote, in which clubs voted to pause the restart of football at Step Three of the non-League ladder, a four-team tournament contested by Bromsgrove Sporting, Worcester Raiders, Church and the Reds will help fill the void and provide the teams involved with much-needed match sharpness.

With matches set to be played home and away, clubs in the area will be treated to six friendlies each against their rivals, with the victors securing the sponsor-named Red Recruitment Cup.

After Alvechurch head to the Raiders in Saturday’s opener, Redditch visit fierce rivals Bromsgrove in their opening encounter on Tuesday, December 15, before Sporting make the trip to Lye Meadow to take on Alvechurch on Saturday, December 19.

Worcester and the Reds go head-to-head at Sixways Stadium on December 18, with Church and Sporting in action at Lye Meadow a day later.

In the final fixture before Christmas, United and Alvechurch clash at the Trico Stadium on December 21.

The tournament concludes with home games for Redditch against Bromsgrove and Alvechurch taking on Raiders on January 2.

In regards to the league, the Government’s next review of the current tier system and coronavirus restrictions on December 16 will play the biggest role in any restart.

Clubs at Step Three  and below will have their fingers crossed for a positive outcome in the aftermath of the review to allow competitive football to resume in the new year.

With the current restrictions causing too many issues in regards to the admission of fans across different tiers – and subsequently an unfair monetary benefit for some teams at the expense of others – an unsurprising 76 per cent of Step Three sides voted for the ongoing suspension of the season to continue in last week’s vote.