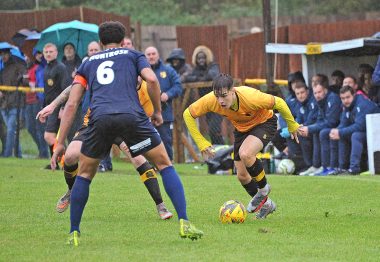 ALTHOUGH Alvechurch’s Southern League Premier Central season remains grounded, two former stars are making the most of their time on the pitch with their respective clubs.

Young gun Jake Wakeling, who made a considerable impact in his four months at Lye Meadow with seven goals in 11 appearances prior to his move to top flight side Leicester City, has been nominated for the Premier League 2 Player of the Month award for January.

The 19-year-old has played a starring role in the Foxes’ development squad since his December move from the Worcestershire club – scoring his first goal in a blue and white shirt during a 4-2 victory over Manchester United – a game in which he also laid on an assist for team-mate Callum Wright.

After repeating those same heroics in Leicester’s following outing against Everton – another 4-2 scoreline which went in favour of the Toffees – Wakeling will now be in contention for the monthly accolade against six other nominees including the likes of Aston Villa’s Louie Barry.

While the forward’s career continues to go from strength to strength, in a fashion that may not end up being too dissimilar to another former Alvechurch and Leicester star in Alan Smith, Wakeling will always be able to point to his time in Ian Long’s side in accelerating his budding career.

Another successful product of the Church system is Josh March, who played a key role in the club’s elevation to the third tier of non-League football, and the 23-year-old forward is in red-hot form for League Two outfit Harrogate Town.

Having only put pen to paper on a loan deal from league rivals Forest Green Rovers at the beginning of last month, the striker has hit the ground running in North Yorkshire with goals in three of his last four games against Tranmere Rovers, Newport County and Crawley Town.