Entaco ease the pressure with maiden win of 2021 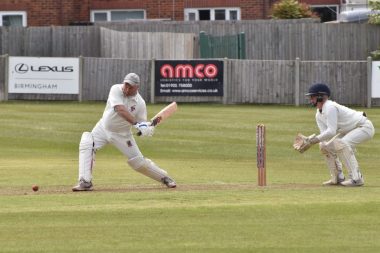 A FIRST win in the Worcestershire League Premier Division for Redditch Entaco saw them move away from danger, after seeing off basement side Bewdley by 76 runs last weekend.

The crucial victory moves Entaco into tenth place, giving Adam Gailey’s side a platform to build upon for the remainder of the season.

With Russell Southwick (53) hitting a half-century, and the duo of Adeel Sajid (49, lbw) and Daniel Protherough (40, no) both approaching that landmark, a 230-8 total left the visitors with an uphill battle at Bromsgrove Road.

And so it proved, as Redditch’s bowlers worked their way through the Bewdley ranks to see off their opponents by the 45th over.

Though the hosts initially struggled at the crease, a third-wicket partnership of 90 between Southwick and Sajid established Entaco’s foothold in the game.

After Sajid’s departure at 142-4, the hosts crept over the 200-run mark thanks to the presence of Protherough for the remainder of the innings – with five hits into the boundary and one maximum score certainly doing no harm for Redditch’s total.

Bewdley had a tough time issuing a reply likely to threaten the hosts, mainly due to a lack of momentum between batting partners.

Captain Rob Combes (26) and Martyn Carr (36, lbw) were the only two players to register meaningful totals for their side, as Ghulam Moyhuddin (3-18) and Haris Ali Mohammed (3-40) ran riot hurling towards the other Bewdley batsmen.

With a trip to second-bottom Old Hill on Saturday, Redditch have a real opportunity to put distance between themselves and their fellow strugglers – pending a positive outcome in Cradley Heath.