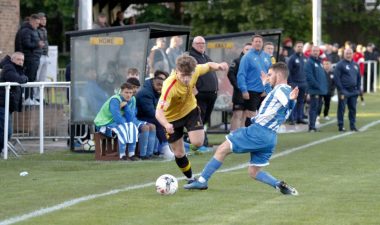 Despite both sides being out of action for a considerable time, both sides showed little sign of weariness. Pictures by Chris Rhodes.

IAN Long’s Alvechurch kicked off their end-of-season programme of fixtures with a narrow 1-0 victory at Darlaston Town on Monday night – courtesy of Tyrell Hamilton’s first-half winner.

The Church did not have it all their own way at The Paycare Ground and had to grind out a win in the well-contested friendly, which precedes Saturday’s trip to Sporting Khalsa and Red Recruitment Trophy fixtures against Redditch United (May 29) and Bromsgrove Sporting (May 31).

With 189 fans in attendance, the full-strength visitors were hoping to shake off any rust and lay down a marker on a slick surface in Walsall ahead of their 2020/21 season run-in.

Perhaps the most important factor from the meeting for Long was the pace and intensity that the fixture was played at, which suggests that the Church players are in good shape to finish the campaign strongly in the next few weeks.

The final scoreline could have been all different, had Town striker Leon Taylor taken a couple of early openings – his first attempt of the night forcing Ollie Taylor to keep parity with a strong save.

While chances were somewhat at a premium, a moment of magic from Hamilton proved the difference. 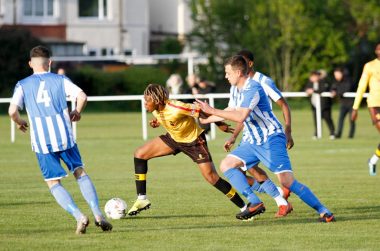 Tyrell Hamilton, centre, was the difference maker for Church. Pictures by Chris Rhodes.

The forward provided the finishing touch to ensure the visitors capitalised on a strong spell of play before half time, creating a pocket of space for himself to sink a 20-yard strike into the bottom-left corner – leaving Darlaston goalkeeper Brad Clarkson with no chance.

After the interval, a shortage of attacking play erased the possibility of further goals, with two shots flashed wide by Hamilton and a blast from Darlaston’s Maxwell Ngbeken the closest that either side came to affecting the scoreline.

Tickets for Alvechurch’s final two home games of the season can be purchased online at alvechurchfc.ktckts.com, with entry for adults at £10, senior citizens at £8 and under-18’s at £5.