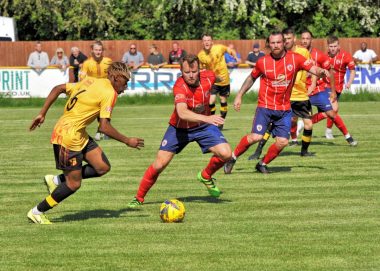 Tyrell Hamilton takes on Bromsgrove’s Leon Broadhurst, in what proves his last game for Alvechurch before his AFC Telford United switch. Picture by Ian Macvie.

In what essentially became a winner-takes-all affair, it required a sensational strike from Sporting’s record scorer to down Church in the 53rd minute, with Ian Long’s men unable to instigate a comeback despite the goalscorer receiving a second yellow with 20 minutes remaining.

It means Alvechurch missed the opportunity to end the 2020/21 campaign with silverware, having beaten Redditch United by the same scoreline on Saturday to keep alive their hopes prior to their Bromsgrove showdown in the end-of-season tournament.

With just two starters from that win over the Reds remaining in Long’s XI in the form of Ethan Sephton and Sam McLintock, a host of youngsters and new faces were given the opportunity to make their bow and bid to leave a lasting impression on their manager.

McLintock was first to try his luck with a 25-yard drive that Sporting shot-stopper Max Beardmore was equal to, while Will Shorrock should have done better down the other end with the hosts’ goal gaping.

Tom Chamberlain missed an equally golden opportunity for Church when firing wildly over the bar following Mason Birch’s knock-down, before unleashing a snap-shot narrowly past the post just after the half-hour mark.

With the game level at the break, it was very much anyone’s guess as to who would shade the tie, although the match-winning moment that decided it was one worthy of winning any match.

Infamous for scoring sublime goals in a Bromsgrove shirt, Cowley touched the ball out of his feet following a ball through from substitute Miro Pais, before whipping a curling shot that dipped wildly into the top-right corner of the net to stun the Lye Meadow faithful.

An equally brilliant moment of play from Luke Yates almost dragged Alvechurch back on level terms, when the substitute dinked an audacious effort goalwards to beat Beardmore but crack the underside of the bar.

With Tyrell Hamilton on the pitch approaching the latter stages, the forward almost made the perfect impact with a stinging shot that just evaded the post.

A second yellow card for Cowley meant it was all one-way pressure from Alvechurch in the final 20 minutes, but with no late drama forthcoming, the Trophy ended up in the hands of Sporting skipper Leon Broadhurst.

In the opening game of the action-packed Bank Holiday weekend, it was Yates’ fine finish after going clean through on goal which downed the Reds, issuing a loss to end United’s participation in the Trophy on a low note.

Having played Alvechurch and Bromsgrove twice, the Reds ended the tournament winless, having tasted defeat in both home and away outings against their rivals – something which Matt Clarke will no doubt be pondering over during the season break.