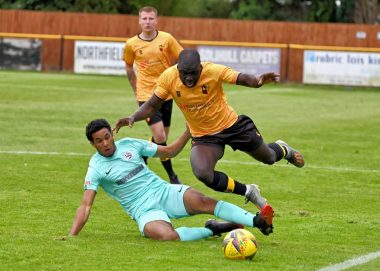 Babucar Sauane, right, is brought down in a challenge for the ball. Picture by Ian Macvie.

A FIRST point of the season for Alvechurch failed to quell the disappointment of a last-gasp equaliser conceded to Royston Town in Saturday’s 2-2 draw.

Second-half goals from Jake Wakeling and Joe Hull twice put Church ahead after a goalless opening, but twice the hosts were pegged back by Royston’s Brandon Adams at Lye Meadow.

The Crows forward struck in the 93rd-minute to deliver a sickening blow and deny Ian Long’s men a first win since New Year’s Day, a reality that Alvechurch will look to correct in Tuesday night’s home meeting with Stratford Town on matchday three of the Southern League Premier Central (7.45pm).

Mason Birch had the first sighter of goal for the hosts, curling a 25-yard effort narrowly wide of the mark, while Josh Castiglione’s cross teed up Isaac Galliford for a volley that flew over the bar down the other end. 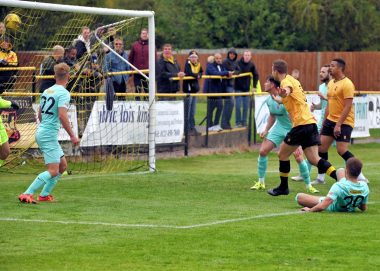 Joe Hull sends the ball into the roof of the net. Picture by Ian Macvie.

An opportunity for the visitors’ Jonathan Edwards went begging on the half-hour mark after nodding wide after a free-kick was swept into his path, while Castiglione forced a reflex save from Church’s Jono Brown as Royston increased the pressure.

Further openings for Galliford and Adam Watkins failed to result in the breakthrough before the break, though it took only a matter of seconds for the deadlock to be broken after play resumed.

And it was the hosts who provided it , despite being up against it as the first half progressed, when Wakeling punished Town custodian Joe Welch for a poor clearance by guiding the ball into the gaping net.

While the game appeared to be petering out to its conclusion, late drama in the final 20 minutes ensured value for money for the spectators that were gathered.

An Adams equaliser with 17 minutes to play meant it was game on again, after the substitute turned home from close range. 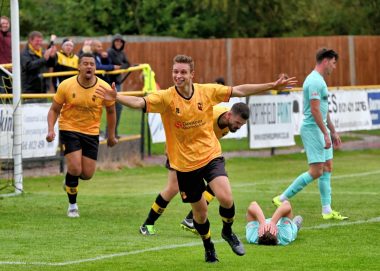 But the goal only appeared to spur the hosts on, and within three minutes it was advantage to Alvechurch once again.

This time it was Hull who provided the finishing touch, the defender getting on the end of a drilled cross to cap a well-timed run.

A flurry of late corners and set-piece opportunities for the away side failed to result in a late leveller, as Church held on for dear life and a crucial three points. 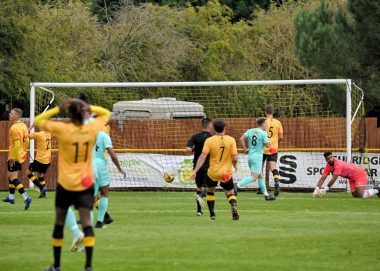 But as if by coincidence the dreaded equaliser did arrive three minutes into stoppage time, when Adams picked out the far corner of Brown’s net to stun Long’s troops.

The games continue to come thick and fast for Church, leaving them little time to lick their wounds ahead of another crunch clash with Stratford – who were downed 4-2 away to Needham Market on Saturday.

Warriors back ‘no relegation’ plan