IT WAS a big weekend for Redditch Borough Girls Under 8s who brought back the silverware.

It came after the team, managed by Donna Amphlett and coached by Dan Nash, also went through the whole season unbeaten.

The players have come through the Wildcat development programme for girls aged three to 11, teaching them to start playing football and develop their skills. 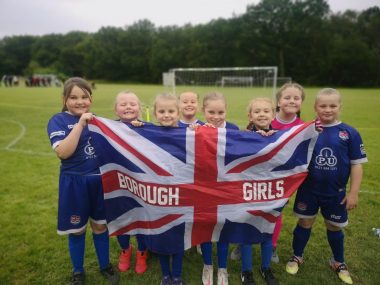 The girls are flew the flag for the club in the final of the Central Warwickshire Girls Covid-19 Cup, winning the final against Leamington Lions 4-1.

Georgie gave Borough the lead but Leamington equalised from a free kick.

The visitors then drove forward but could not break through the Borough defence and the team quickly turned the score around to 2-1.

They then built on the lead with Tegan adding a third and Georgie rounded off the win with a fourth.

As well as winning the cup 4-1, Redditch Borough Girls Under 8s have played 12 matches this season and scored 111 goals.

And, after only conceding 12 in total, they finished up with a goal difference of 99.

They celebrated their campaign with some non-alcoholic fizz.