RESIDENTS certainly made their voices heard at last week’s public consultation event relating to a controversial proposal for a temporary solar and battery storage installation on land to the south of Earls Common Road near Stock Green.

Phil Coathup, chair of the 100-strong group, said he had been in contact with Redditch MP Rachel Maclean who visited the site the previous week with Coun Laura Gretton. 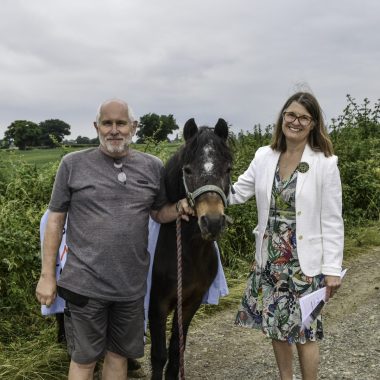 He said: “We are delighted that Rachel has taken a personal interest in this proposal – and the time to understand the issues involved.

“She has sent a survey form to over 2,000 residents to really get to the heart of the situation.”

Mrs Maclean said: “As an MP I have no direct involvement in local planning decisions, but this doesn’t mean that I don’t care.

“I still take a close interest in these matters as these decisions affect the lives of my constituents.”

She added she was pleased to meet the Roundhill Wood Solar Farm Opposition Group to discuss what she said were ‘legitimate concerns’.

“From the results I’ve received to the survey I sent out to 2,000 residents, it’s clear the vast majority of residents are opposed to this application.

“I will continue to raise their concerns and ensure their voices are heard.”

Nikki Dean, team leader on wildlife and heritage for the group, said: “The spring wheat they saw has been described as the best in the county, and furthermore we were able to make them aware the site is home to many protected trees and a number of important animal species, such as the Great Crested Newt and the locally famous, but rare, Brown Hairstreak butterfly.”

Several other residents also expressed fears about the about the choice of location.

One said: “I’m not sure why they’re proposing to build on green fields when we have plenty of brownfield sites to consider first – it’s such a lovely location which will be ruined.”

Conor McAllister, senior project manager at JBM Solar, said: “Our two consultation events have been very helpful, and we thank all those who have joined us.

“As well as providing clean renewable energy for the equivalent of more than 18,000 homes annually, Roundhill Solar Farm will significantly benefit nature through a 94 per cent net gain in biodiversity, as well as safeguard local agricultural use on site by leaving 95 per cent of the site available for sheep farming.

“We recognise there are concerns so are including extensive planting and setting back the solar panels from the boundary to help screen the panels.

“Whilst we’ve worked hard to listen to concerns, we have also received a substantial number of supportive comments from local residents who recognise the vital role the site can play in addressing the climate crisis.

“We are continuing to review feedback and are concluding various surveys prior to submitting a planning application later this summer.”

Police appeal – Can you help identify this man?

Row over selling of Community House rumbles on