A REDDITCH couple who have lost three of their children to a rare heart condition have launched a new scheme to offer free holidays and respite breaks to bereaved families.

Over the years it has provided life-saving defibrillators for communities and groups.

Now that cause has come to an end they have started Carrick’s Retreat – An Angel’s Mission.

When Carrick passed away, they were nominated for a free week’s holiday where the family made memories and took plenty of photographs and videos to ‘make them smile and giggle’.

Rob said: “Sadly, with our older children we didn’t get to take many photos or videos as sometimes cameras were quite expensive and we didn’t have mobile phones like we do now.

“We noticed that we did not have many photos or videos of them when they sadly lost their lives.”

After the holiday they had the idea to start a campaign so they could offer a similar experience to the one they had enjoyed to others going through a difficult time.

“Some amazing people got involved to help raise some money in Carrick’s memory to be able to help us achieve this goal.” 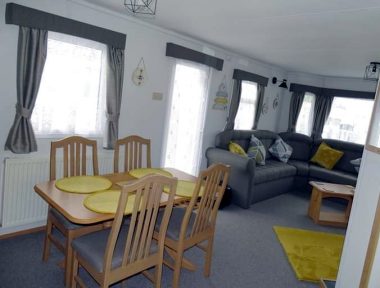 In April 2021 they visited a caravan site in Skegness and explained to the owners what they had in mind.

The static caravan was bought and most of last summer was spent renovating it with reupholstered seating, new carpets throughout, a new shower and other enhancements.

The pair are now looking for nominations for families who have lost a loved one – parent or child.

All applications will be looked at and Carrick’s Retreat can now offer free family holidays for up to six people.

The only conditions are the families take as many photographs and videos and make as many memories as they can, that at least one picture is shared with the pair and a £100 deposit is needed which will be returned provided there are no breakages or damage.

Rob and Maggie are also appealing for funding for Carrick’s Retreat to cover the £5,000-per-year costs to run the scheme – overheads and bills.

Email Carricksretreat@mail.com to nominate a family for the scheme and visit the Carrick’s Retreat – an Angel’s Mission Facebook page for more.

Residents voice fears over level of drug dealing in Redditch

Positivity rocks for Lauren as Baton Relay comes to Redditch