WEST Midlands Railway has revealed its strike day timetables ahead of next week’s industrial action.

The National Union of Rail, Maritime and Transport Workers (RMT) be striking on Tuesday, Thursday and Saturday next week, impacting the number of trains that can run.

Residents travelling on the Cross-City line to Bromsgrove and Redditch from Birmingham New Street and Lichfield Trent Valley will be limited to one train per hour to their town.

The first train leaving Redditch for Lichfield Trent Valley via Birmingham New Street will depart at 8.55am, while the final service going all the way through to Lichfield will leave Redditch at 3.55pm.

You will still be able to get a train to Birmingham New Street until 5.42pm. 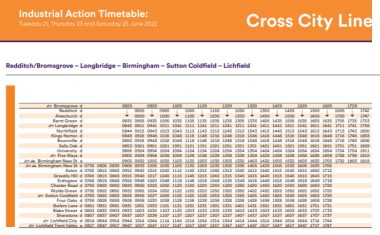 The first train to Redditch will be leaving New Street at 7.53am, and the first service beginning at Lichfield Trent Valley will depart at 9.09am.

The last service heading towards Redditch from Lichfield Trent Valley will leave at 4.09pm, and this service will depart from New Street at 4.53pm. 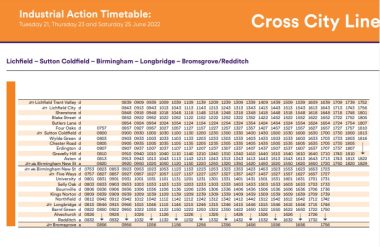