On the buses: Diamond on the right road to recovery in Redditch

IT’S 6.45am at the Diamond Bus depot in Plymouth Road and I’m with operations manager Chris Bridges before heading out on the 70S school run to Ridgeway Academy.

Chris is a Redditch woman who is knocking the local operation into shape, giving the drivers a sense of belonging and busily restoring the company’s battered reputation.

“When I came here two and a half years ago we were 40 drivers short and they didn’t even have a rota so they couldn’t plan their lives,” she said.

“Since then we’ve got the establishment up to just eight short which I’m happy with as the drivers like to have the overtime available.”

The effect has been transformational; with shape to their day drivers are happier, inspectors can be out inspecting rather than driving buses, and, with the aid of new technology Chris, her team and the passengers know where a particular bus is at any one time.

“We’ve introduced contactless ticket machines and we can message drivers through those machines,” she said.

“With contactless the drivers don’t have to worry so much about handling money and the customers can see our buses in real time with our app so no waiting for ages out in the rain.

“The day I walked in here I wish I could have taken some photos because today I work with people who do give a damn and they do that every single day.

“We have not lost any mileage here in 18 months through sick drivers which to me is fantastic.

“The buses are running from 5am and the fact is you don’t know if a particular bus is going to have a burst water pipe or some sort of problem and every bus company the length and breadth of the country has the same issue.

“It’s frustrating – for us, the drivers and of course the passengers, but these things happen.”

The drivers themselves are a United Nations of Redditch, with people from Europe, Africa and Asia all at the wheel.

“Their work ethic is fantastic, they keep going and going – because English is not their first language people think that sometimes they come across as a bit rude, but that’s not the case, they are trying to do their best,” said Chris.

“One sign of how things have changed is the nice letters and compliments we have received – it shows they really are appreciated.” 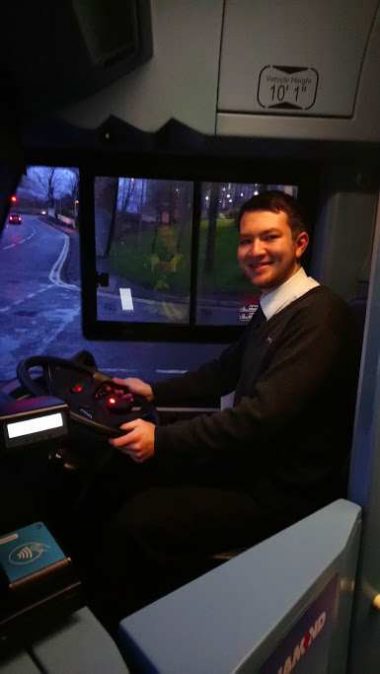 ALL the drivers carry out a comprehensive safety check of their vehicle before taking it out on the road in the morning and Matt Neale is no exception.

“I thought it might be boring and only did it as a back up but I really liked the inter-action with the passengers,” he said.

As a consequence he took the job full time and hasn’t regretted it since.

On the 70S the pupils are in high spirits but well behaved, with many thanking Matt as they clamber off at Ridgeway Academy.

A return to the bus station sees us set out as the 55 to the Alex before venturing out again as 70 to Astwood Bank, which returns with senior citizens heading to the Kingfisher for shopping.

“A lot of people are saying thank you – it does make you feel appreciated for the service you’re providing,” said Matt.

Five young people walk away from horror crash in Redditch

Partial demolition of the Foxlydiate pub endorsed by Redditch planners