VANDALS have trashed the Peace Memorial at Bomford Hill Park.

A volunteer for the Church Hill Big Local said they spotted around ten youths vandalising the memorial around 10.30pm last night.

They scattered after the volunteer’s dog barked.

Damage includes the two granite plaques in front of the tree which forms the memorial stone, seating and a nearby bench all being spray-painted over. 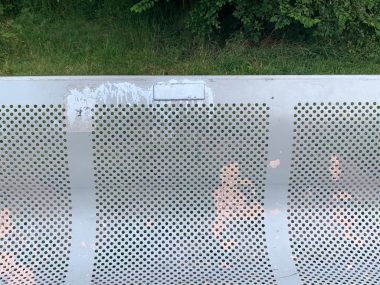 The memorial is dedicated to soldiers in the area who served and died during the First World War and to anyone who has joined the armed forces.

Church Hill Big Local vice-chair Ian Johnson said: “What kind of low life defaces a memorial that pays tribute to those that gave their lives to defend our community?

“To go from the euphoria of the past few months to this is so disheartening.”

This has been the latest in several instances of vandalism around Church Hill over the last few weeks and comes less than a week after Armed Forces Day.

The Safer Neighbourhood Team put in a notice in Bomford Hill park to notify residents it was cracking down on anti-social behaviour, but that was defaced last night as well. 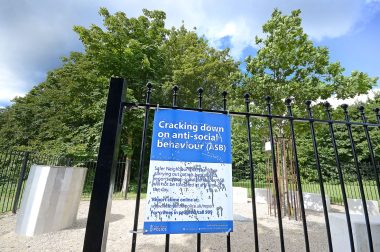 Redditch Police Safer Neighbourhood Team has since posted this statement on social media: “Officers take any reports of criminal damage seriously and damaging a memorial shows the sheer lack of respect from these individuals.

“We will not tolerate this totally unacceptable behaviour.”

Councillor for Church Hill Bill Hartnett said he put in a request to council officers on Wednesday for temporary CCTV to be installed and contacted them again today to try and get a team to clean the memorial.

He added: “The vandalism has upset a lot of people and they are lost for words.

“I really can’t understand why anyone would want to do something like this.”

Insp Lee Page from West Mercia Police said officers were aware of the increased amount of vandalism in the area and vowed to step up patrols in the area.

He added they were working with local partners as part of Safer Redditch to find those responsible and prevent future offences.

Anyone with information about any incidents of criminal damage should call 101 or contact Crimestoppers anonymously at 0800 555 111.