RESIDENTS living in Evesham Mews have again expressed concerns about the rubbish being left on their balconies and have asked Redditch Borough Council for help.

They contacted the Redditch Standard last month when they said one of their bin chutes had been blocked for two years while another was unblocked by the council around six months ago but was re-blocked shortly after – and has remained that way ever since.

Rubbish has been put onto communal landings and residents added last month they were concerned about the smell this would cause once the weather improved.

One said the smell had become unbearable, especially last Friday – the hottest day of the year so far.

Another said the rubbish went up to her front door at one point this month and she had to keep her window closed as the smell was beginning to impact her daughter’s health.

The rubbish has led to rats being spotted at Evesham Mews, with one woman taking a picture of one outside her front door last week. 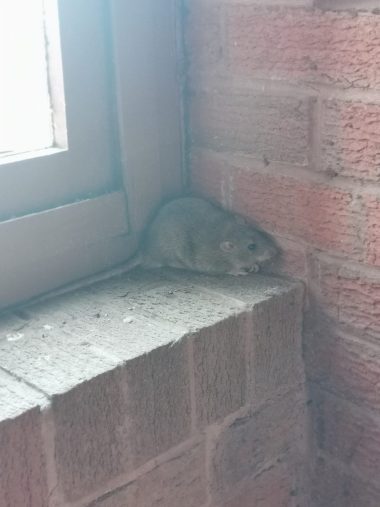 In addition, residents said the two main entry doors to a block of Evesham Mews flats does not lock.

They also say the communal landing areas – scheduled to be cleaned fortnightly – were not being cleaned adequately with mess still on the floor after it had been attended to.

Five people living at Evesham Mews all told us they were embarrassed to bring people around to their homes due to the mess on the landing areas.

Residents said they had attempted to contact the council on many occasions but very rarely received a response.

The council has recently put up posters around Evesham Mews outlining its ‘Waste and Recycling System Improvement plan’.

It also said the benefits of the new arrangement would include moving from an internal to an external system making it easier for residents to recycle, adding it would result in less litter and outside waste.

A council spokesperson said: “We want to reiterate the chutes are not fit for purpose, we have told residents this, and this is why the improvement works are happening.

“There are flyers up around the mews about this and we keep on telling residents not to leave bags on the balconies and to use the receptacles placed in the car park to deposit their waste.

“There is no excuse for this slovenly behaviour from the minority of residents who are making life uncomfortable for the majority.

“This council is committed to improving its properties to the tune of £13million and these works at Evesham Mews are a part of this.

“We ask residents also play their part and take pride in the place where they live which will help to form a community which looks out for one another.”