AN Army veteran who served with 37th Regiment in Redditch is fighting for his life after being hit by a car while marshalling a Remembrance Sunday parade.

Ade Stowell, 35 years a soldier first with the Royal Artillery and then with the Royal Corps of Signals, was helping his local Centenary parade on November 11 in Studley.

He received life changing head injuries in the accident which is still being investigated by police.

His distraught wife Chrissy, is at his bedside in the neuro-surgery ward of the Walsgrave Hospital in Coventry.

She said: “He is still in a coma and nearly breathing on his own. He is not really communicating – I feel he can hear my voice but that might be just wishful thinking on my part.

“The prognosis is not good, and he is unlikely to ever look after himself again – I know the doctors have to give the worst case scenario, but they were not terribly encouraging.” 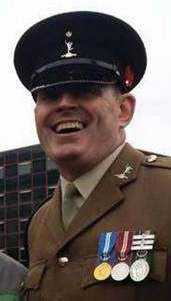 Ade Stowell in the uniform of the Royal Signals.

The accident happened as Ade, a member of the Royal British Legion, was helping to clear away ‘road closed’ barriers at the Spernall junction of the A435 and A448 in Studley.

The A435 had been closed to allow the Remembrance Sunday parade, marking 100 years since the end of the First World War, to take place.

The centenary event had brought more than a thousand residents out on to the streets and Chrissy was waiting for her husband back at the village cenotaph when the accident happened.

He was rushed to Worcestershire Royal Hospital by ambulance and then transferred to the Walsgrave where he was operated on.

Ade, aged 54, was a career soldier, rising through the ranks to Warrant Officer II in the service of his country.

He joined the Reservists and finished his time in the military with Redditch’s own 37th Signals Regiment based at Moons Moat.

He then continued his service by joining West Midlands Police as a civilian detention officer based in Coventry.

Chrissy said he enjoyed an active life, playing rugby in his younger days, cycling, climbing and walking their two dogs.

She added the two had also become ‘reasonably mediocre’ snowboarders.

She also spoke of her gratitude to the local community to the incident.

“People have been amazing and I’d just like to say thank to everyone for being so supportive – we used to live in Birmingham and I cannot imagine ever having the same support there as we’ve had here.”

A Just Giving page has been set up at for Ade by his of his old Army mate Adrian Proffitt at www.justgiving.com/crowdfunding/ady-proffitt to raise £10,000 to support him through this initial period.

“£10,000 is an astronomical amount but it’s to provide a cushion while they get themselves sorted,” said Adrian, who served with Ade for 22 years.

“At this stage everything is irrelevant as we have to come together to support Ade and hope against hope that he can beat this.

“Ade is so well respected – he has worked all over the Army and then something like this happens.

“Ade has been an inspirational leader and trainer of hundreds of soldiers and in a strange way it seems this tragic accident could have only occurred whilst Ade was assisting on his local Remembrance Parade and putting something back into the community and ultimately the country that he has been proud to serve for so long, this really defines the man that he is.”